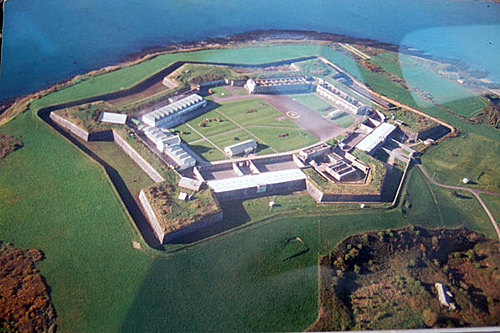 Cork County Council attraction Spike Island will hand over the crown of Europe’s Leading Tourist Attraction to the Acropolis of Greece this week, with the Athens attraction succeeding the island as the 2018 award winner at the 25th annual World Travel Awards European Gala, held in Athens Saturday 30th June.

The island attraction won the title of ‘Europe’s Leading Tourist Attraction’ of 2017 at the World Travel Awards European Gala held in St Petersburg, Russia, beating an extremely competitive field that included Buckingham Palace, the Sagrada Familia in Barcelona and the Eiffel Tower. The island went forward to represent Europe at the World finals held in Vietnam and placed second behind Maccu Picchu of Peru.

Island Manager John Crotty said the island was delighted to hand over the title to such a prestigious attraction. “The Acropolis has been delighting visitors for over 2000 years and we hope we here on Spike can enjoy the same longevity. It has been an amazing year for the island and there is no question the international recognition the award brought helped us spread the word about the quality of our offering. We only reopened as a visitor attraction in 2016 following significant investment by Cork County Council and Failte Ireland, and our site is now the top rated attraction in Cork on Tripadvisor. We have a great platform to continue to develop the site and ensure each visitor leaves with a real sense of Ireland and Cork’s rich history”.

The Acropolis of Greece had previously won the award in 2014 with other previous winners including the Eiffel Tower, the London Eye and the Guinness Storehouse. Greek tourism minister Elena Kountoura said the award for the Acropolis followed 30 years of continued redevelopment of the site which began in 1975, and a strong recent focus on improving the visitor experience with improved ticketing and downloadable apps.

Spike Island is set to look for a second round of funding to further develop the site in 2019 with an application for co-funding by Cork County Council and Failte Ireland. Plans are in place for an International welcome hub on the island arrivals pier where international visitors could orientate themselves on how best to enjoy their visit. And there are hopes to reopen the former Victorian dungeons buried deep under the Forts walls, and to reopen the islands largest cell block which previously housed the islands most famous inmate, the General Martin Cahill.

The island is also planning a series of permanent exhibitions which will outline the strong links the island has with America, Australia and the UK, and hopes to grow visitor numbers from these countries. “We won’t rest on our laurels as we look to accommodate ever increasing international visitors numbers to the island”, said Mr Crotty. “With a tender process under way to secure a second ferry and double digit growth every month this year, we are well on our way to not just being the top rated attraction in Munster but also one of the top visited sites, and that can only be good for Cobh, Cork and Ireland”.

The island will celebrate the 80th anniversary of the handover of the island from the British to the Ireland on July 11th, with a ceremony attended by the new Mayor of County Cork Cllr Patrick Gerard Murphy and Lord Mayor of Cork city Mick Finn. The ceremony will include a military band, a 16 gun salute from the Forts saluting battery and a military flypast by the Irish Air Corps.