This week all approach roads to Cobh were cleaned regularly by Tidy Towns volunteers.Paddy Histon spent several days cleaning weeds at the COBH flowerbed by the ferry and watering the flowers.The Preaching House steps were finished with all weeds now removed and bramble overgrowth cleared.Harbour View was swept of hundreds of cigarette butts. A plea to residents to bin their butts and not dump them on the street.On Saturday nine volunteers tackled the eyesore on the approach to St. Mary’s Terrace off Church street. The magnificent stone retaining wall was totally obscured with briars that hadn’t been cut in years and were growing onto the footpath. 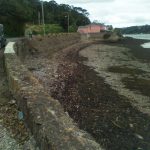 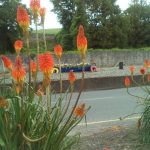 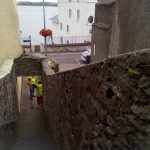 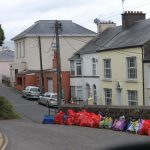 The lawn area in front of the houses was also cut as this is only very occassionally cut by Cobh Town Council. Bags of rubbish were gathered from Carrigaloe strand and Cuskinny strand as well as cans and bottles at the Rock,Cathedral Car park and Black Railings.Work is in progress at the Black Railings in preparation for Spring Landscaping.Thanks to people who have been in touch with Cobh Tidy Towns to keep an eye on an area near where they live and pick litter to help us in the effort to have a tidier town.Thank you to all who have submitted photos of Cobh for our 2012 Calendar.Closing date is the 31st August so email your photos to cobhtidytowns@gmail.com Volunteers continue to meet Mondays at 12,Tuesdays at 6.30 at the playground and Saturdays at 10am at the playground on the Five Foot Way.